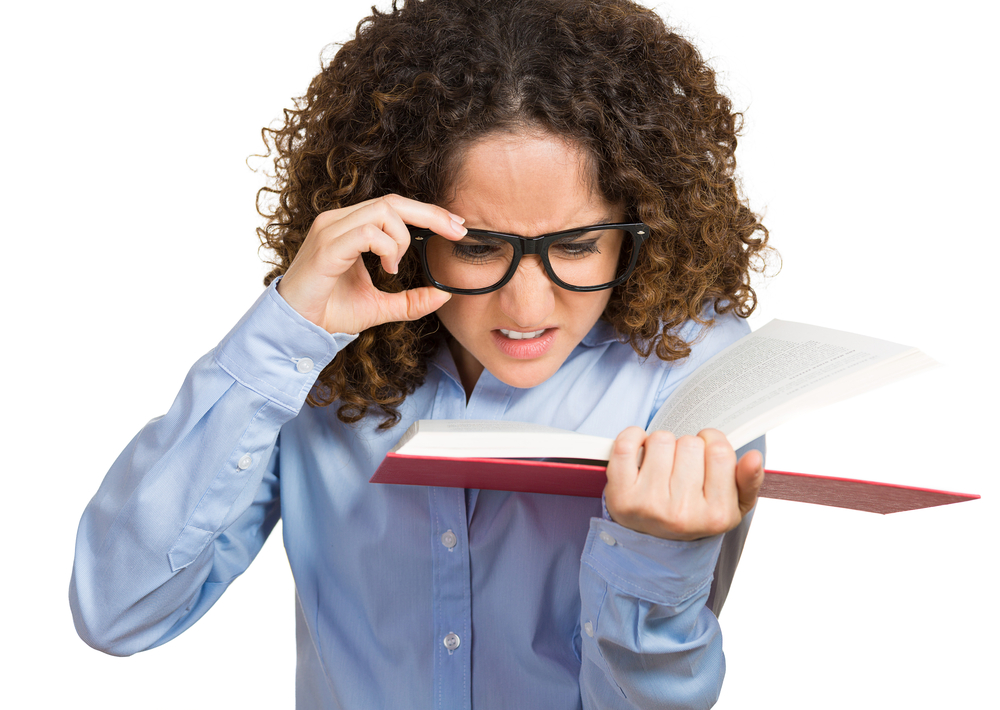 Age-related macular degeneration (AMD) is a leading cause of vision loss among people age 50 and older.AMD is a disease of eye in which macula of eye is deteriorated. The macula is the part of the retina that is responsible for central vision, allowing tosee fine details clearly and sharply, any disorder as is the case of AMD causes blurring of central vision. Over time, the blurred area grows larger prompting the growth of blank spots in your central vision. Objects also appear to seem less bright as they used to be before AMD.

The macula is an oval-shaped, yellow coloured spot near the center of the retina,this yellow colourof macula absorbs excess blue and ultraviolet light entering the eye, thus actas a natural sunblock. The macula comprises of millions of light-sensing cells that sense the light and provide sharp, central vision. The mechanism of image formation begins with the retina turning the light into electrical signals; sending them to brain through optic nerves, where they are translated into the images we see. When the macula is damaged, the center of the view may appear blurry, distorted, or dark as shown in the picture.

Also Read: How To Prevent Eye Strain While Staring at Your Computer?

Most AMD exist in the dry form. This condition is caused by thinning of the macula tissues. Dry macular degeneration is onset with formation of tiny yellow or white pieces of fatty protein called drusen under the retina. This leads to thinning of macula. People affected with dry macular degeneration may not observe any influence in the central vision because the vision loss occurs gradually.

What are the stages of AMD?

There are three stages of AMD depending upon the number and size of protein drusen. 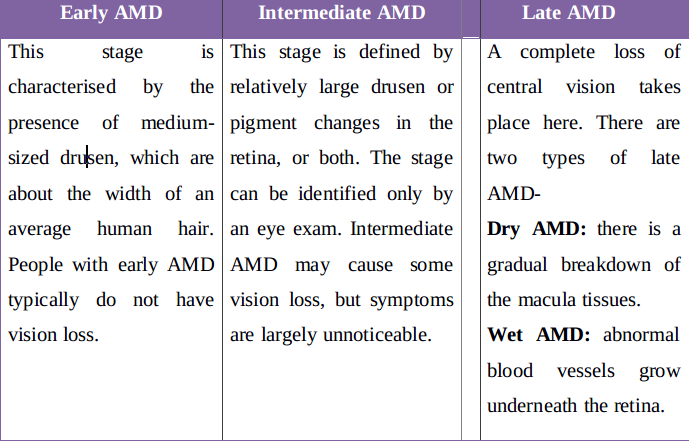 How your AMD could be detected?

The early and intermediate stages of AMD usually start without symptoms. Only a dilated eye exam which is a golden standard test can detect your AMD. The ophthalmologist places medicated eye drops in your eyes to dilate your pupils and study it using a special magnifying lens. Sometimes test may be accompanied by fluorescent dye (Fluorescein angiogram). A harmless fluorescent dye is injected into your arm, dye travels to blood vessels in your eye making it possible to see leaking blood vessels and also it confirms the presence of drusen protein and pigment cell, if any. However Amsler grid chart can be used to detect any anomaly in central vision. Changes in your central vision may cause the lines in the grid to disappear or appear wavy, a sign of AMD.Dry macular degeneration is tested byAmsler grid.

How to use Amsler Grid chart?

Hold the grid 12 to 15 inches away from your face in good light. Cover one eye with hand. Look directly at the center dot there in chart with the uncovered eye and keep looking at it. While looking directly at the center dot, note whether all lines of the grid are straight or if any areas are distorted, blurry or dark. Repeat this procedure with the other eye. If you see any wavy, blurred or bleak pattern, you are required to see your ophthalmologist. 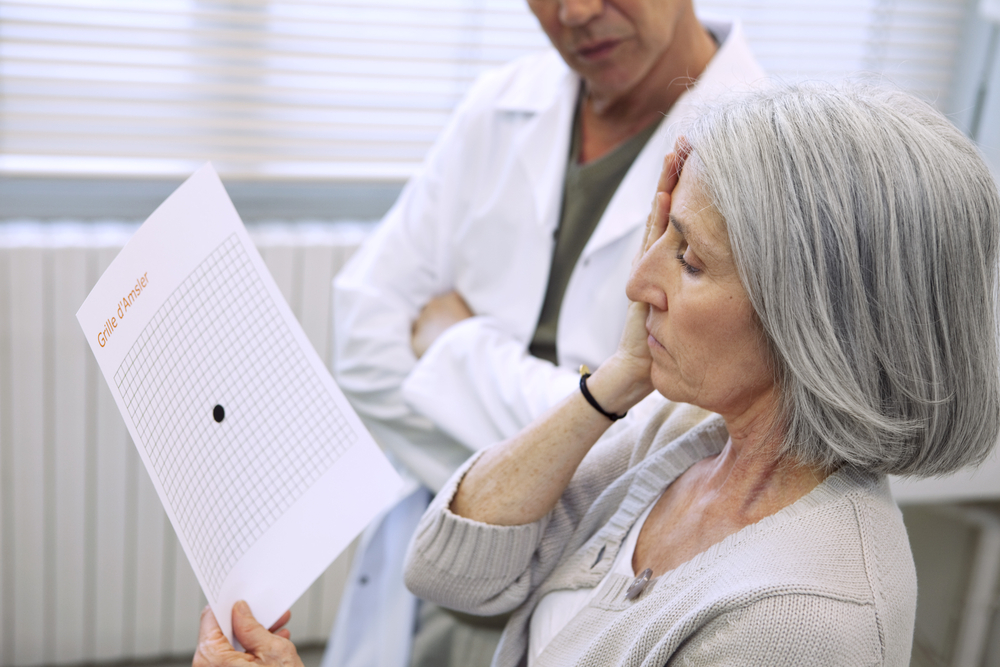 Who are more likely to be affected?

AMD generally exhibits few or almost no symptoms in the early stages, so it is important to have your eyes examined regularly. Not everyone with early AMD will develop late AMD that is complete loss of central vision.

How is AMD treated?

Early AMD does not show the symptoms or loss of vision therefore no treatment exists for early AMD. However a dilated eye exam can be carried out to determine if your condition is advancing.

Researchers suggest that daily intake of certain high-dose vitamins and minerals can slow progression of the disease in people who have intermediate AMD, and those who have late AMD in one eye. The diet including combination of vitamin C, vitamin E, beta-carotene, lutein, zeaxanthin, omega-3 fatty acids zinc, and copper can reduce the risk of late AMD by 25 percent.

The most important thing to cope with AMD is to stay positive. People who remain hopeful say they are better able to cope with AMD and vision loss. Stay engaged with family and friends. Seek a professional counselor or support group.

Get useful health tips and remedies regularly, on your Facebook feeds.

In medical term, the state of redness or inflammation of the cornea is called Keratitis. The Keratitis treatment mainly focuses upon removing that inflammation caused by any sorts of infections,…

Is Toilet Paper Bad For Your Health?

Experts warn that toilet paper doesn’t clean properly, even after cleaning traces of poo left behind that could cause worrying health issues.